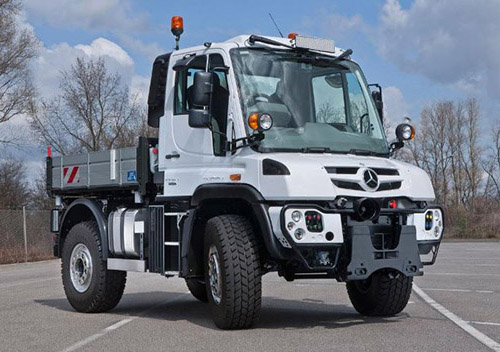 The range of shunters is available with a compressed air system that allows full control of the train braking system from the driver’s position. All Aries Rail shunters are compliant with Australian Standards including the recently published AS7502:2016 Road Rail Vehicles standard.

The largest rail shunter in the Aries Rail range is a road licensable truck with a shunting capacity of 5000t. Built on an 8×6 truck chassis with high-torque automatic transmission, the vehicle is able to shunt in both directions using front and rear couplers.

The vehicle may be licensed for road travel if required.

Aries Rail are proud to work directly with Mercedes Benz to provide an officially imported Unimog fitted with a hyrail conversion that is engineered and manufactured in Australia, fully compliant with Australian Standards.

Unlike un-official “parallel” or “grey” imports, Aries Rail can supply a vehicle that may be easily road licensed without expensive second stage manufacture processes and retains the full Mercedes Benz warranty. Australian based technical support and training for the vehicle and hyrail equipment is provided by Aries Rail in partnership with Mercedes Benz Australia. Even with all of these advantages, the Aries Rail Unimog shunter is highly competitive against unofficial imports.

Equipped with a number of factory fitted options that make it a very capable rail shunter, the Unimog has been popular in Europe for many years and is now available with fully AS compliant hyrail for the first time, through Aries Rail.

The Unimog may be licensed for road travel if required.

The Colmar diesel shunter is a dedicated heavy duty shunter. Fitted with the familiar Aries Hyrail control system, the driver has full control of the machine from the driver’s seat with a view in both directions through windows that provide excellent visibility.

Electric shunters are often used in a yard or workshop environment where they can be easily recharged and are able to move freely around on a hard, level surface.

The electric shunters may be driven either from the drivers position or by wireless remote control.

The full range of Colmar electric shunters is available in Australia and New Zealand through Aries Rail.

Aries Rail have converted many telehandlers for use as rail shunters. Available for all Australian rail gauges, the machines retain their boom function with the front coupler quickly detachable to allow the use of standard forks or buckets for off-rail work.

Wheeled Loader – Up to 1000t Capacity

The Volvo wheeled loaded is a heavy duty machine converted exclusively for shunting duties. Available for standard gauge rail only, the articulated steering is automatically locked when the rail wheels are deployed.

Aries Rail have converted multiple Volvo L70 loaders for use as shunters.

Farm tractors have been used for moving rollingstock for many years with many now fitted with hyrail equipment to allow them to comply with ONRSR and WorkSafe requirements relating to the safe movement of rollingstock.